We are immensely excited to announce that the V3 interface update and the V2 NFT Fundraiser update are officially en route to launch!

In this update, we'll take a look at the new things that will be introduced on the platform, the order of their launches and what deliberations we have taken into consideration to build a safe path for our project's long term goals.

One important aspect of the V3 update is the implementation of new and fresh KALM use-cases. The first use-case we're looking to implement - Kalmy's Yield Cheat Codes.

Kalmy's Yield Cheat Codes will be the priority and main use-case of the KALM token. At this point in time, we're still working finalising more details before releasing them but we can definitely say that - vKALM holders will have an immense advantage over the users that do not hold any KALM or vKALM.

So the question is - are your bags going to give you an advantage when V3 launches? 👀

Another major change that's coming with the V3 update is the completely new, all-in-one interface. We have merged the lending, borrowing, and vesting elements  into a singular page - trimming off unnecessary information while integrating new ways of making the leverage farming experience easier for anyone. Be it new or experienced users.

One of the most requested updates was to add more informational content. Be it guides, tutorials, or just simply just more information to be available about a user's farming position.

The new update will feature a page dedicated to short guides and tutorials not just about Kalmar, but also about cryptocurrency in general.

New to everything and don't know what's going on? Not a problem! Everything will have an explanation at the ready.

As mentioned, the new interface will also feature all the info you might need about your farming position, including  the amount farmed, the value of your position in both borrowed asset and USD, the amount received if closed, active liquidity, total PNL, farming PNL, impermanent loss, risk, and the list goes on.

We might even include a position history chart, who knows? 👀

If you're not actively trading, DeFi protocols are not naturally engaging since yield farming is mostly a stake-and-watch process.

BUT to do something about that - after the V3 update, we will start a long series of events every few days in which you can earn KALM tokens, NFTs, access to *redacted*, and much more! (Editor: yeah they literally asked me to type out "redacted").

We're thinking - why not change the pace of Defi into a more engaging daily process instead of just watching? Its always a bit more fun getting yours hands into the BUIDLing yourself!

Early Kalmarians will remember that a portion of the public sale was hosted through our second product - the NFT fundraiser. Since then, we have been carefully reviewing the trends in digital collectibles to determine further use-cases.

We will be integrating the NFT fundraiser product into Kalmar's platform and will serve as a significant element of the events to be held on Kalmar. On top of the agreed upon and finalized NFT fundraising sales strategy, the sales types supported will now be more diverse. This, for example, will include plain KALM gamified sales with winners and burns.

With this large-scale update, we are finally releasing our original vision of gamification within DeFi and NFT concept. This is truly an important moment for the team - we are now officially moving from MVP (minimum viable product) analytics stage towards a more competitive execution based on the feedback from our early community.

We want to thank all the early members of Kalmar and loyal KALM holders for helping us shape the roadmap with all your responses. To celebrate the new stage of Kalmar’s development, we will be applying for the Binance MVB program.

It’s now officially the time to compete for DAU, update our MVPs, market the shaped product to wider audience and show the world why Kalmy is such a cool squid!

We have many products planned on our whiteboards. But with that, there also comes the internal debate of "fixing" the current platform first OR continually push new products and updates.

We chose to proceed with the former, as we believe it to be the cleanest road for our long-term goals. That is why the V3 update is extremely important, not because it is a new interface or a new use-case release, but because it opens the doors to a paved road on which we can speed things up.

We believe that building a strong foundation is the key to innovation in the future. We're preparing for the marathon, not just the short sprint.

It is true that innovation often requires short-term compromises for long-term gains, and the V3 update is no different.

In order to ensure smooth updates and safety in the future, one big step we have to take is the creation of new, upgradeable contracts.

What does that mean for you as a user?

It means that, when we're finished with the updates, users will have to move their assets to the new contracts (closing and re-opening your lending and borrowing positions).

Although these procedures are very normal in DeFi, we will do everything in our power to make the transition as smooth as possible by integrating a special transitional page in which you will not have to click more than two buttons for a complete transition.

IMPORTANT: Do not close your positions now. Only when we release the official announcements.

The change will be happening a few weeks from now, so there is no reason you should start closing your positions at this moment of time. Just sit tight, enjoy your farming like you've been doing all along, and wait for our announcements.

And now, there are a few weeks left until our platform and our native token will have a major change for the better. A change which we've been actively planning and working on for months.

Inspirational quote to end the blog : "It just take a little every day to build a mountain... in... time." 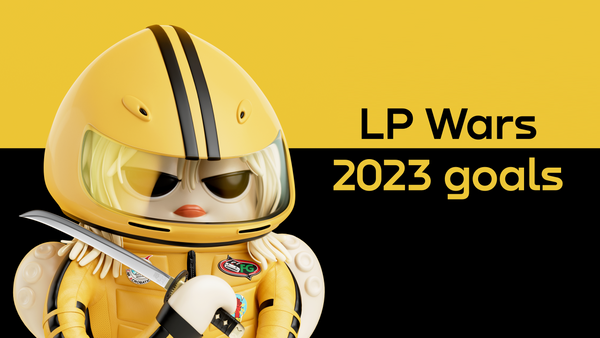 An honest and informative blog on our next steps. The small ones and the big ones. The Bride's katanas have been sharpened during almost two years of Alpha build-up of Kalmy App – time to start moving to Beta and slowly start using the weapons. LP Wars test launch. We are

The year has been a chaos, oof. Congrats if you are still here. In fact, there is A LOT of you guys here and we can't ask for more with all the madness in the world. Kalmarians have the real champs DNA. Confirmed. So, what's next? Just like NFT staking. 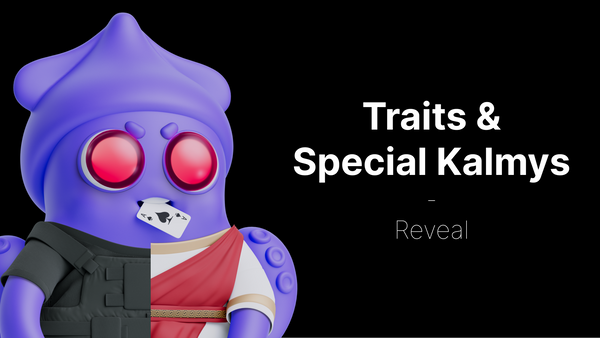 The first reveal is here, with 2500 Kalmy NFTs showing their tentacles for the first time! Our Kalmy NFT collection is not fully revealed yet, with the full reveal happening on December 25th (Happy Christmas!), with that said we still believe some clarity when it comes to traits rarity and